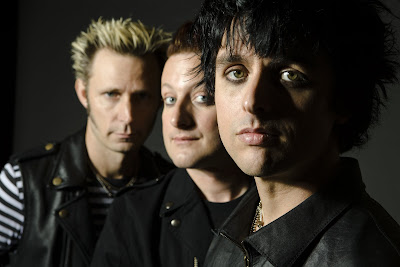 Burbank, CA- Green Day will premiere the video for their new single, “21 Guns,” exclusively on MySpace Music on June 21st at midnight. The video was helmed by noted director Marc Webb, who has lensed clips for such artists as My Chemical Romance, Weezer, and All-American Rejects, and is making his feature film directorial debut in July with (500) Days of Summer.

“21 Guns” is the second single from the band’s latest album 21st Century Breakdown, which debuted at No. 1 on the Billboard Top 200 chart, as well as on the Rock, Active Rock, and Alternative charts, fueled by the Alternative radio No. 1 single “Know Your Enemy.” 21st Century Breakdown, which Rolling Stone has called “a rock opera in which the rock always comes first,” also topped the charts in 24 countries including the UK, Canada, and Japan.

Over the past month, Green Day has continued to work with MySpace Music for the promotion of 21st Century Breakdown. During the week of the album’s release, they played an exclusive concert in New York City which was filmed for the site’s premiere online concert program, The List. The performance can now be seen on The List’s official MySpace profile.

This year’s show will take place at the Gibson Amphitheatre in Los Angeles on Sunday, August 9th, and air the next day, Monday, August 10th, on FOX at 8 p.m. ET/PT. Fans can vote for Green Day at http://www.teenchoiceawards.com/.

Green Day, which is singer-guitarist Billie Joe Armstrong, bassist Mike Dirnt, and drummer Tre Cool, are preparing to launch their first proper tour of the United States and Canada in more than three years. The tour runs from July 3rd through August 25th. Please visit http://www.greenday.com/ for more details.