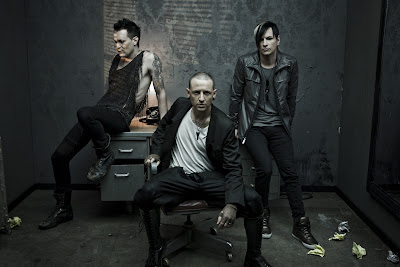 DEAD BY SUNRISE — NEW BAND FROM LINKIN PARK’S CHESTER BENNINGTON — TO RELEASE DEBUT ALBUM, ENTITLED OUT OF ASHES, THIS FALL

Burbank, CA- CHESTER BENNINGTON , lead singer for multi-platinum, two-time Grammy-winning rock band LINKIN PARK, has put the finishing touches on OUT OF ASHES, the debut album from his new band DEAD BY SUNRISE. The album is tentatively scheduled for a fall release through Warner Bros. Records.
The band, which is Bennington on vocals, guitarists Ryan Shuck and Amir Derakh (from Orgy/Julien-K), bassist Brandon Belsky, drummer Elias Anda (also from Julien-K), and keyboardist Anthony Valcic, recorded OUT OF ASHES in Los Angeles with producer Howard Benson (Motorhead, My Chemical Romance).

The songs on OUT OF ASHES began to take shape during some downtime Linkin Park had before the band began recording their double-platinum 2007 album Minutes to Midnight. “I came up with a few songs that felt and sounded really good, but I knew they weren’t right stylistically for Linkin Park,” Bennington says. “They were darker and moodier than anything I’d come up with for the band. So I decided to work on them on my own rather than turn them over and have them transformed into Linkin Park tracks.”

Bennington says that the music he wrote for Dead by Sunrise is darker, sexier, and more personal than anything he’s done before. “It’s got me all over it,” he says. “This is the music I hear in my head.” Indeed the creative freedom that Bennington felt making OUT OF ASHES is evident on songs like “Crawl Back In,” “Let Down,” and “Walking in Circles.” “There are no hip-hop influences at all on this record, which is obviously a big difference,” he says. “Also, the amount of vocal layering and use of harmony really showcase my voice in a new way. I was involved in the entire process of making the record, including the programming and the production, which was not only a great educational experience, it was very empowering. I’m really excited that the album is finally going to see the light of day!”

Bennington has been busy as of late, having spent the past 18 months touring with Linkin Park in support of Minutes To Midnight, which has sold more than six million copies worldwide since its release in spring of 2007. One of the most successful rock bands to emerge this decade, Linkin Park has sold more than 45 million albums worldwide. They’ve scored a remarkable string of chart-topping hit singles, a pair of Grammy wins, and earned an international fan base whose members number in the millions.