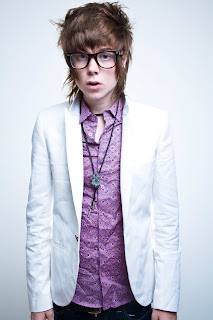 Tour presented by Rockstar Energy Drink Celebrates the 25th Anniversary of Alternative Press Magazine
Burbank, CA – Emerging band Never Shout Never, the brainchild of 18-year-old singer-songwriter Christofer Drew, has been chosen to headline the 2010 AP Tour, which celebrates the 25th anniversary of the Cleveland-based magazine Alternative Press. The line-up, which also features Joplin, The Cab, Hey Monday, Every Avenue and The Summer Set, has been handpicked by the AP staff. The tour kicks off on March 19th and criss-crosses the country through the end of April.

A ticket pre-sale will begin at 5 p.m. local time on January 4th and continue though January 8th. The regular on-sale begins on January 9th. Pre-sale tickets are available here: http://theaptour.frontgatetickets.com/.

Never Shout Never has recently sold out all eight shows on its December tour, which begins on the 16th. The band is touring in support of their upcoming Butch Walker-produced release What Is Love?, which will be released by Loveway Records / Sire Records on January 26th, 2010. The digital version of a four-song EP sold through clothing retailer Hot Topic is now available from all digital service providers. A video for “What Is Love?” can now be viewed on MySpace.

Drew will hit the road in January for a solo acoustic tour in support of What Is Love? Never Shout Never recently completed a headlining tour, culling tunes from the upcoming album, as well as from the three EP’s Drew released on his own Loveway Records, including The Yippee EP, Me & My Uke EP, and The Summer EP, which broke into the iTunes Top 10 Album chart in June. Drew took home the coveted “Breaking Woodie” Award at the MTVu Woodie Awards in November.