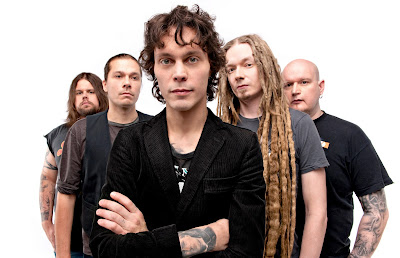 FANS AROUND THE WORLD CAN ENTER CONTEST TO WIN ROCK BAND™2 MUSIC VIDEO GAME, PLUS HIM ALBUM

Burbank, CA – On February 23rd, Finland’s hard-rock heroes HIM and Sire/Reprise teamed up with MTV Games and Harmonix to release a brand-new downloadable content of three HIM tracks, including their new single “Heartkiller,” for the Rock Band™ Music Store in connection with HIM being Xbox’s featured artist for the month of March. The other downloadable tracks are “Ode to Solitude” and “Wings of a Butterfly.”
Now the band is asking their fans around the world to help them set the record for the largest global Rock Band performance in history. On March 25th fans can make a video of themselves performing “Heartkiller” between 9 p.m. and 11 p.m. ET and upload it to the HIM’s YouTube channel (www.youtube.com/him) within 24 hours beginning at 10 p.m. ET to be entered into an official contest at which time the members of HIM will choose the Top 5 best performance videos. The band is asking fans to film their performances and post them at the same time in order to set the world record for the largest global Rock Band performance ever. (Videos should be tagged “Official HIM Rock Band Entry.”)
The contest’s winners will receive a copy of the Rock Band 2 music video game, plus a copy of HIM’s new album Screamworks: Love In Theory & Practice, featuring “Heartkiller” and “Ode to Solitude.” “Wings of a Butterfly” is from the band’s 2005 album Dark Light. There will be three contest winners online and 10 contest winners with radio stations across the country. Don’t have Rock Band at home? Record your entry at Official Rock Band Bar Night Venues nationwide on March 25th (www.rockband.com/local).
Screamworks: Love In Theory and Practice, HIM’s seventh studio album and the follow up to 2007’s Venus Doom, bowed at No. 1 on the Hard Rock chart and No. 2 on both the Rock and Alternative charts. Screamworks, which was released by Sire Records on February 9th, also debuted at No. 25 on the Billboard Top 200 album chart.
Tickets are on sale now for the band’s spring North American tour in support of Screamworks. Please visit www.heartagram.com for dates and details.
www.heartagram.com