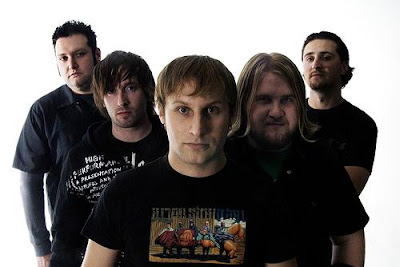 As 3 Pill Morning prepared to wind-up their tour supporting Framing Hanley, vocalist Jeff Stebbins spoke with me about 3 Pill Morning and what’s in store for them.

Notes From The Pit: How would you describe 3 Pill Morning’s sound to a new listener?

Jeff Stebbins: With 3 Pill Morning, we really try to write high-energy rock music that appeals to a wide range of people. We try to focus on writing songs that people want to move to, want to dance to and rock out to and hopefully say something in the song that they’ll remember.

NFTP: What is the meaning behind the name 3 Pill Morning?

Jeff: Well, as you know, naming the band is the hardest thing. we had a list of names, most of them extremely awful, but that one just kind of seemed to stick due to the fact that almost everybody’s medicated in some way, shape or form these days. Whether you take three Tylenol or three multi-vitamins or whatever it may be, everybody’s popping a few pills in the morning to get up for each day. So, that’s where the name came from and it stuck and it seems to have hit home for a lot of people.

NFTP: How long has 3 Pill morning been together and how did you meet?

Jeff: The band started in 2003, so we’ve been doing it for a while. We came from different bands inside the Twin Cities and continued to work through and find the right group of individuals that were writing music that we were all really excited about. Over the last few years we’ve really been hitting the road pretty much non-stop playing hundreds of shows every year and now we’ve been getting a lot of national shows as well. It’s been an evolution and we’re kind of excited about where it started to where it’s going now.

NFTP: Any highlights from your tour with Framing Hanley?

Jeff: I think every show for us, this is our first time playing out east, and the response that we’ve gotten has been incredible and exciting. Every town that we’ve gone to has been a new experience and like I s aid, the reception for an unknown band from Minneapolis out this far east is good and we’re just really enjoying it. The guys in Framing Hanley are incredible guys and we’re just enjoying hitting each city with them and rocking to a different crowd every night.

NFTP:  What’s up next for you after this tour?

Jeff: After this tour we are going to get back to the studio and continue pushing through a few more tracks. We’ve got a lot of music we’ve been writing on the road, so we want to get back and start to get some of that stuff put together in hopes of putting out an album here late in 2010. It looks like late Sept./early Oct. we’ll be back on the road again playing a couple of nation-wide tours, so we should be staying busy on the road it looks like.

NFTP: What bands inspired you growing up and what are you listening to now?

Jeff:  Growing up I was a big Zeppelin fan and a big Red Hot Chili Peppers fan. Some of the first show experiences, with the energy of a Limp Bizkit show or something like that, those influences of some of these songwriters and front men, we’re trying to incorporate that into our style of music. Now I listen to a lot of different stuff ranging from older rock and roll, Metallica, to some of the more modern acts like Chevell or Breaking Benjamin.

NFTP: Do you remember the first record you bought as a kid?

NFTP:  Any must-haves when your touring?

Jeff: Honestly, this tour, the must-have is bottled water. It’s been almost 100 degrees almost every day and when we’re traveling around in the van it’s a necessity having that water with us.

NFTP: Is there anything you would like to add or say to your fans?

Jeff: Being an independent band at this time, we can’t say enough how much we appreciate people paying the money to come out to shows and buying a CD and buying merch. It’s really what keeps us on the road, so the fact that there still are true music lovers out there, that are out supporting live music, is refreshing every night that we get to see that. We thank them very much. Make sure you keep an eye on us.