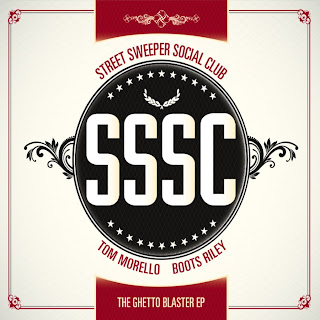 Street Sweeper Social Club, the band comprised of Tom Morello (Rage Against The Machine/Audioslave/The Nightwatchman) and Boots Riley (The Coup), return with The Ghetto Blaster EP, out August 10th on SSSC/ILG. It’s the follow-up to their 2009 critically acclaimed, self-titled debut. The lead single off the seven song EP is a cover of M.I.A.’s “Paper Planes” which RollingStone.com has the recorded debut of HERE.

Starting today, fans have the opportunity to pre-order The Ghetto Blaster EP at SSSC’s own webstore – http://sssc.hasawebstore.com/ – They’ll be able to choose from autographed CD’s, vinyl and bundles that include both, plus a limited edition t-shirt. A digital download of “Paper Planes” is available as an instant gratification track with any pre-order.

Tom Morello on the new EP: “On The Ghetto Blaster EP we were shooting for a combo of the first Clash record and the Ohio Players greatest hits, interwoven with tractor trailer size riffs of course. This record definitely has more of a ‘band’ feel than the first, and Boots’ lyrics and delivery have never been sharper.”

Boots Riley on the new EP: “This EP is much more raw, rough, and rugged. We did it in a little studio and got a big sound. We had overflowing, musically violent and beautiful energy in that room – five dudes sweating and bouncing off the walls, and we captured it in the recording. Because of us touring together for the past year, it’s a more organic meld of our styles and personalities. The music Tom wrote for this EP will make you go nuts. The covers we did are done with love and our own swagger. I like it better than our last album.”

The M.I.A. cover quickly became a fan favorite when they were on the road with Nine Inch Nails and Jane’s Addiction last year. After their Coachella performance in April, the LA Times gushed “The Social Club proved something important: that rap and rock, such a treacherous pairing given its history of appealing to the testosterone-heavy, shirtless frat-dudes, can be strong and beautiful, smart and angry.” Meanwhile, Spin awarded SSSC’s “Paper Planes” rendition at Coachella this year as the festivals “Best Unexpected Cover” in their review.

SSSC will be out on the road in support of the EP playing select Warped Tour dates and all of the Rock The Bells Festival in August with Snoop Dogg, A Tribe Called Quest & Wu-Tang Clan among others.