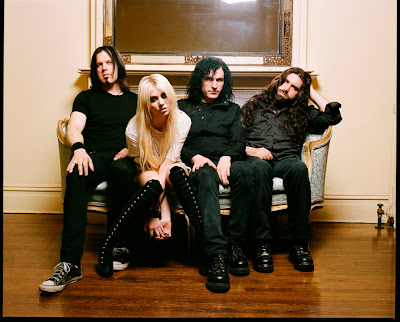 The Pretty Reckless performs at Firebird in St. Louis February 22 with Runner Runner and A Thousand Horses in support. St. Louis native Taylor Momsen, along with band mates Ben Phillips, Mark Damon and Jamie Perkins are touring to support their debut album Light Me Up.

The Pretty Reckless performs at Firebird in St. Louis February 22 with Runner Runner and A Thousand Horses in support.

St. Louis native Taylor Momsen, star of the CW’s Gossip Girl (Jenny Humprey,) How the Grinch Stole Christmas (Cindy Lou Who,) and more fronts The Pretty Reckless. The 17-year-old vocalist and songwriter, along with band mates Ben Phillips, Mark Damon and Jamie Perkins are touring to support their debut album Light Me Up. The single “Make Me Wanna Die” also appears on the Kick Ass soundtrack.

I had a chance to chat with Taylor Momsen about The Pretty Reckless’s upcoming tour, debut album and her St. Louis roots:

Describe your sound for anyone unfamiliar with The Pretty Reckless.

Taylor Momsen: It’s very song-driven rock and roll. The show itself is very loud and I think it’s a lot of fun. We’re there to entertain, so hopefully people leave entertained. That’s our job.

Favorites to play live…we all love “Since You’re Gone” love. That’s one of our favorites. It gets to rocking into like a groove and it’s a really fun one to play live. Favorites from the record…I can’t pick a favorite song. You know, it’s like picking your favorite child. I can’t do that. “Make Me Wanna Die” is the first song that was written for the record and the one that sets the bar and the tone. That has a special meaning to me and place in my heart. I can’t pick a favorite song.

Seeing Jack White perform live was influential for you as a child. What or who influences your songwriting now?

Honestly my influences have kind of remained the same since I was a young kid. The Beatles are my all time favorite band. They’re the reason I started writing songs. They’re the first band I ever heard, literally, when I came home from the hospital. They’ve definitely influenced me in a giant, giant way and still do. They’re amazing. And, you know, a lot of the classics-Led Zeppelin, The Who, Pink Floyd, AC/DC I love. I love The White Stripes and Soundgarden, Oasis, Audioslave and Nirvana. I’m not directly influenced by one band, but a lot of different great musicians. People, who write really great songs, like Bob Dylan.

How do you feel about acting vs. your music?

I think of myself as a musician who also acts. I’ve been writing songs since I can remember and have been working on my art and my craft for quite some time, just people haven’t seen it. Music has always been my focus, it’s always been my passion and acting is a job that I’ve enjoyed and still enjoy, but it’s not what I want as my career for the rest of my life.

Whether I’ll act in the future-I can’t really imagine giving it up because I’ve done it for so long. I really love acting, but music is definitely my focus and what I need to do, what I love. It’s the thing I couldn’t give up if my life depended on it. I want to make records the rest of my life and write songs and play shows. It’s what I love to do; it’s when I’m the happiest. I’m so fortunate to be able to do what I love.

You have the courage to express yourself in ways that may not be the “norm” for girls your age and in your position. What do you have to say to people who may want to dismiss you due to your age or not liking your look, what you say, etc…?

I think there’s different ways to look at it. I think, don’t dismiss it because of my age or because you know me from the show before you’ve listened to it, because that’s not fair. You’ve got to at least give it a chance. Feel free not to like it, not everything’s for everyone, that’s fine, just at least give it a chance. As for the writing of it, I wrote it and it can’t be debated past that. It’s a very, very honest record. As I’ve said before, the names have been changed to protect the innocent. There’s not much more to it than that. It’s an honest record from my perception of life and what I know and what I’ve experienced and seen. It might be darker. I have a dark perception of a lot of things, but I don’t think anything’s wrong with that.

You’re just doing your own thing.

Yeah, we wrote the record with no agenda. We didn’t write for any purpose other than to write good songs. We weren’t writing for the media or a particular market. We just wrote to write good songs. Hopefully people will give it a chance. I think that’s part of the reason the record turned out the way it did, because we had no agenda other than to make it the best that we could make it, with nothing in mind but that.

You’ll be back in your hometown of St. Louis February 22. Do you still have family and friends here?

No, we all moved away. I moved away when I just was just turned 10. I don’t know anyone there anymore, but it’ll be weird to see all of the old stomping grounds. I may have to go by my house or something if I have time when I’m in town. I got to see it when we were on Warped Tour. It was totally strange, totally deja vu. It’s always fun to come back where I was born.

I know you were young when you left, do you have any favorite memories of St. Louis?

I wrote my first song in St. Louis. We had a swing set in my backyard and a little house and I loved it. I started writing songs in the backyard on the swing set. I traveled a lot when I lived there. I had a house there and my dad had a job, but I was gone and moving around a lot. I spent a lot of time in New York and a love of time in Los Angeles, and all over because I was shooting. I was on lots of different auditions so I was rarely there.

Check out The Pretty Reckless online: